I never really knew who to talk to about my body image issues. It seemed like the issue was everywhere, but since no one talked about it I felt all alone. Was I the only one who hated the size of my thighs, wished that my stomach would become a bit flatter, and my hips a little less pronounced? Every time I tried to talk about it with someone, it became the catalyst for the commonly known “fat talk” which engaged other people (generally women) in lamenting about their bodies. It was interesting, too, because even the people that I was sure had no issues with their bodies, found perfection in mine and faults in their own. Take for example, Rachel. She’s 5’11 with not an extra pound of fat on her body to be found. I saw her body as sleek, and her legs were perfect for wearing shorts and she didn’t have to worry about extra jiggle from her thighs. Her breasts might have been on the smaller side, but it balanced out her overall thin frame. When I lamented to her, she told me how she wished her body was more like mine. “You are perfectly proportioned!” She would tell me. I was kind of thrown off the first time she said that. Me? Just your average looking girl is perfectly proportioned? I took it for what it was worth, but it was strange because I never saw it that way. 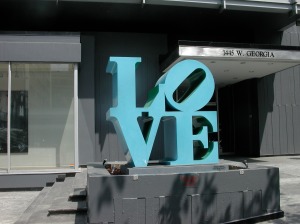 Now I guess some people might say I have no right to complain about the way I look: I am 5’5” weighing in around 137 lbs. I carry my weight in my hips and thighs, so I would be what they would call “pear shaped”. Like Rachel said, I am pretty equally proportioned, and I am fairly fit because I enjoy working out. Even then, sometimes I feel like people think I am searching for compliments when I tell them about how I feel unhappy with my body. That’s never a good feeling.

About 3 years ago I got into my first serious and long term relationship with a guy. Let’s call him Bobby. Anyways I generally told Bobby everything, but at that time my body image issues were at an all time low. I remember lying on my side in my bed and I would feel how deep the curve was from my waist to my hip. I would cry to him, saying I wish I was skinnier, and how I felt like clothes didn’t look good on me. He was always trying to get me to wear jeans, but I outright refused and just told him that I wasn’t a “jeans kind of person”. The real truth was that I was mortified of wearing any colour on my lower half that wasn’t black. So I spent about two years only wearing lululemon pants, dresses, and leggings. Looking back on it, it seems kinda silly, but I wasn’t comfortable enough with myself to try something that could potentially expose my flaws. I didn’t care how sexy I could look in jeans. It just wasn’t safe.

Anyways, back to the story: Bobby was reassuring and told me that all of this nonsense was in my head. I mean, it was to a certain extent. I was a little bit less fit back then, and my body had more curves. (Curves are totally awesome, by the way, but at that point in my life I rejected them as being even remotely sexy or attractive. Maybe if I’d had a broader sense of what beautiful was back then, I wouldn’t have been so far in the body image gutter). But anyways, even though he was supportive, it came to the point where I needed him to tell me that I was good looking and pretty. My own approval wasn’t good enough. If someone were to ask me what I would do differently, I would definitely not recommend depending on someone else for my own positive body image.
Why you ask? It places your own self-worth on someone else’s approval. Your own opinion isn’t good enough. Also, your boyfriend (or girlfriend maybe) starts to notice these little “imperfections”, such as those tiny little stretch marks on your hips that aren’t actually very noticeable, how your thighs jiggle a little bit when you run, and how your legs aren’t straight as an arrow. Or perhaps, they only saw these “flaws” as parts of you that they were completely attracted to, but then after all the lamenting and complaining, they begin to second guess themselves.

Over the years, however, I have learned to base my self-worth on something more than my body weight and shape. Am I cured of having body image issues you ask? Hell no. Do I still feel self-conscious about the size of my thighs? Well, duh. Do I wish I had a six pack of abs? Who doesn’t! The point is though, that I’ve learned to see what my body is capable of DOING, instead of how it looks while doing it. I am proud to say that I have successfully completed two 5k races, I go to the gym at least 4-5 times a week, and I am conscious of the foods that I put in my body. 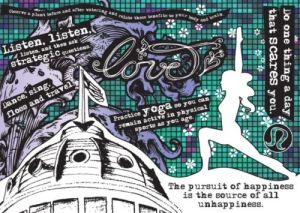 I’ve also learned that some guys love women who have a little bit of curve to their body! Fuck me, why didn’t anyone tell me sooner? Maybe because curvy women aren’t really portrayed in magazines and tv shows. I just kind of assumed that my body type was undesirable because it was unrepresented in magazines, on television and in movies. Thankfully I found Women’s Studies during my academic career, and learned that that being bombarded by images of certain body types can really do a number to one’s self-esteem. And the other thing I learned? I wasn’t alone! There is an entire society of people who are unhappy with their bodies! I wish I’d gotten the memo.

At this point, I am tired of trying to be something that I am not. I am tired of dwelling of my so-called flaws. I want to be strong and a positive role model for others, in teaching them that they can be happy with themselves, no matter what their size. I want to talk to young girls, as well as my female friends, and have them know that I support them. I still feel a bit uncomfortable talking about these issues, because its something that I avoid as much as possible. But there’s a good quote that says, you really begin to live when you start living out of your comfort zone. Well, I’m going to try and keep moving out of my comfort zone, and continue to live a healthy and active lifestyle. I never want to feel like I wasted years not appreciating what my body can do for me, and I’m not going to let issues with my body image stop me.  xox 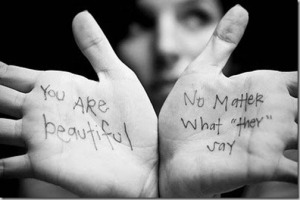