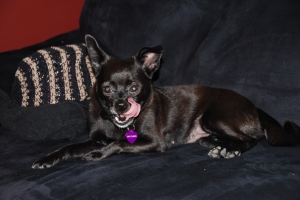 Ok, so we all know about the fear of failure. We all sit on the couch watching Netflix instead of attempting to train for that half marathon, because really we’ll probably fail at it. But here’s the kicker- what if we really were successful?? What if we actually made it to that half marathon and kicked ass?? I say that because I have made myself a victim of Epilepsy so many times and it really hasn’t gotten me anywhere. So what’s the point of this little nugget of wisdom? A: don’t make yourself a victim of a situation, and B: why let fear of success hold you back? If you do end up failing, at least you can say you tried.

I also was watching a video with my Mom last week about Dealing with Anxiety through Imagination. Essentially, the premise was that we haven’t been taught much about imagination during school, so we don’t have the mental capacity to believe that things *will* work out, and our fears won’t collapse at our feet in shambles. So, instead of actually falling and having a seizure during a walk, I told myself that *will* make it home successfully and unharmed. I tried this tactic this week and it actually worked!! It was amazing! So I have been trying to think the best and imagine the best possible outcome. Surprisingly it has been amazing. Maybe you should try it!!

In the past week my life has changed monumentally. I have adopted a little chihuahua pug mix and she has brought so much joy and happiness to my life, let alone routine. I now have a set bedtime, set walking times for the dog, and set feeding times for the dog. I also feel less lonely which has really helped a lot with regards to my daily mental health. In addition, I feel like more like a “productive” person in every day life, which has made me reach out for further aspirations, which I would have never bothered with in the past.I recently have firmly decided to get a small volunteer position so I can continue ongoing learning in the field of Social Work. Yesterday I wrote a great cover letter and prepared my resume for a volunteer position that I really hope to get! It would be perfect for my ongoing learning as extensive training is provided, as well as it will be able to utilize my skills such as one on one skills, advocacy, and making referrals. So cross your fingers for me!!

So what are you holding back on, just because you may or may not succeed? A 5km race? A new job? Seeking new friends? I say go ahead and try- the results may just surprise you!

I hope you are having a fantastic week! Fight the good fight! Love you all! xox

2 thoughts on “Is Your Fear of Success Holding you Back?”