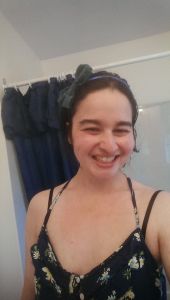 Hey everyone! I am helping out with the American Recall Centre, which is a new site devoted to inspire good health, and providing up-to-date FDA information.They are HON code verified, and focus on patient safety:  http://www.recallcenter.com/resources/

Anyways, as you have probably noticed already, my name is Sita and I was diagnosed with epilepsy at the age of ten. I’m going to be twenty five in a couple of weeks, just to put it in perspective, (for those of you who don’t know, Epilepsy is a brain disorder that causes you to have seizures). When I was a kid, I was pretty much the poster child of someone who lived with well-controlled seizures. My seizures only occurred about twice a year, and even then they were in my sleep and the worst that would happen is that I would wake up with a bloody tongue. I never felt affected by this medical condition; I just felt like I was an ordinary kid who took medication twice a day to help control these mysterious seizures that only presented themselves on a rare occasion. My neurologist (a doctor who deals with epilepsy and other brain disorder conditions) was in awe. I was going to be graduating from high school soon and I was heading off across the country to start university. She seemed to think this was a big deal! At the time I just kind of shrugged my shoulders. Wasn’t everyone expected to graduate high school and go to university? I mean, my parents never said that I had to go to university, but it was something that I wanted, and I didn’t know why it was such a big deal.

Adjusting to university life was a bit of a struggle, as I tried to balance the stress of work and becoming more independent. The seizures still occurred from time to time, but I was never really in serious danger, as they usually always occurred while I was in bed or in my room. Well, except for the time that I did a face plant because I had a seizure while running. Other than that, the ride was pretty smooth.

January of 2012 is when things got out of control. I had a couple of minor seizures, but as the months kept coming more seizures came too. It got to the point where I feared going to school in the event that I would have a seizure and smack my face on the floor. Even worse than the physical harm to my body was the shame and embarrassment I had about the seizures. If you have ever witnessed a seizure, you will know that they look a little bizarre. I started to become very worried, and ultimately became very depressed. At the time I wouldn’t have told you that my anxiety was up the wazoo and I was so far in the depression hole that I couldn’t find a ladder. I was pretty much unaware of both. Even then, I am good at putting on a good face when I have to. I didn’t want to burden anyone. Plus, I figured that I was just a tired out student. I mean, no one wants to get out of bed on a Monday morning, and sometimes it’s sometimes hard to focus in lectures. Also, students are busy, right? We don’t always have time to eat properly, or at all, which is what happened to me as I found myself less hungry for food, and less hungry for the things that used to bring me joy.

I was pretty much in extreme denial. I just saw depression as something that happened to other people. Oh boy, was I wrong. The interesting thing about depression and epilepsy is that they work together in a happy little cycle. The more seizures I had, the more depressed I became, and the continued depression would cause more seizures. I was afraid to go anywhere on my own, even to meet a friend for coffee nearby. The seizures were so unpredictable that they happened at unexpected times, which left me little to no time to get to a safe place.

This left me feeling trapped in my apartment. I hated to make plans with my friends in case I had to bail at the last moment, or I was afraid of having a seizure while I was out. I started to yearn for the days where I could leave my apartment by myself and just go for a walk without any worries. It sounds so trivial, but when I was unable to go anywhere by myself without extreme anxiety, it seemed like a distant life that was no longer mine.

This experience taught me a very valuable lesson. Never take anything for granted. Even though being able to meet up with people and enjoy time with friends sounds so trivial, it is essential for ones well-being. I can’t be alone all the time and I need my friends to help maintain the richness of my life.
Also, I’ve learned that, despite this year, I have it pretty good. Other people who live with epilepsy are unable to work, go to school, or are behind in their schooling. Some people even need to wear head protection all the time to protect them if they fall. Four years later, and I finally see why my neurologist was in awe of my accomplishments.

If there’s anything that i believe in, it’s that I believe that everything happens for a reason. (To a certain extent at least). I think this experience has taught me that I need to live in the moment, which I am working on. This is a key component of mindfulness, which is the idea that you are fully engaged in the moment that you are in, and every moment is ‘now’. I find it hard to be in the ‘now’, but part of me believes that the universe was trying to teach me a lesson when all of this was happening. I can’t skip over parts of my life. I have to live them, no matter what is happening. Additionally, many of these past few months have been very low-key for me, just to improve my health, so I have learned to find meaning in this ‘non-doing’. This means finding meaning in what I’m doing, even if it appears to be non-productive.

My seizures are getting under better control, but I still feel fatigued from all the medications I need to take. Despite all of this though, I managed to receive my Bachelor’s of Social Work degree in 2014, but as of right now I am focusing on writing a book on my experiences of living with epilepsy as a young twenty something year old, plus ultimately getting work in the field of social work. I would find it very rewarding to work with other young children and teens who have epilepsy, but I would be happy to work with people who have other disabilities or mental health issues.

I find that telling this story to people is like ripping off a bandaid. The more I do it, the easier it becomes, and the easier it is to move on and gather strength, regardless of the situation.

One thought on “All About ME! My Updated Story”