Hey friends! I hope you are doing well wherever you are in the world. I have been having an exhilarating week ever since TedxStanleyPark. (I will have my video up as soon as it is out!)

While I was walking my dog this evening,  I was thinking about what it means to be an inspiration and my struggle with accepting this fact. This was potentially evoked by the fact that I won an Alumni Award from my middle school that I will be accepting at the end of the month. When I was first told that I was the recipient of the Alumni Award I didn’t really know why.

When I think about the past and resisting the idea of being an inspiration, I constantly didn’t want to be seen as inspiring because I was just a “normal person” trying to get through her life. I almost resented being called an inspiration because it made me feel even more different than my peers and friends. As an Epileptic (or PWE) it is easy to feel “different” because my neurotransmitters sometimes misfire, or don’t fire when they are supposed to. (If we are going to get technical here).

After Tedx, I realized that it’s OKAY for me to embrace being an inspiration to other people. I was talking to my friend Debra the other day, and she so eloquently put it that I have not let my Epilepsy define me, and I am not going through life as a “Broken person”. I am still persisting, despite my challenges. Yeah sometimes life sucks, and I have been struck with deep depression in the past. This past week I received a bracelet from my friend that said “my story isn’t over yet” with the semicolon symbol. Not everyone knows this, but Project Semicolon is now a pretty well known symbol for to remember people who have died by suicide, and to bring light to depression, addiction, and self-harm. I want to cry when I look at my bracelet, because it reminds me how far I have come. (Thank you Rikarux and Ryan).
According to the Merriam Webster Dictionary, Inspiration has several definitions. They are:
“Something that makes someone want to do something or that gives someone an idea about what to do or create; a force or influence that inspires someone”

“A person, place, experience, etc. that makes someone want to do something”

So as we can see there are multiple meanings to what an inspiration is. Now that I look back on my past with wide eyes, and to my future with excitement fluttering in my tummy, I can say hell ya. I am an inspiration ❤ 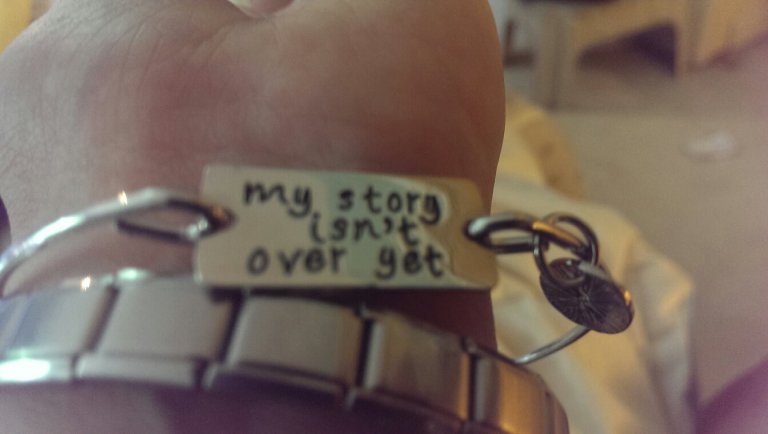 2 thoughts on “Learning to Embrace Being an Inspiration”